How to Delete All Photos on Your Mac

Ebike Vs Car: Is It Possible to Replace a Car with An Electric Bike?

Unlike ebikes, cars are a widely accepted means of transportation in most parts of the world. With the first car being invented in 1886, you can be sure of different designs being showcased over the years.

Considering the availability of second-hand cars, city architecture, and several other factors, many wonder if an electric bike can effectively assume the role of a car. Taking into account other costs that come with purchasing a car such as insurance, fueling, and general maintenance a clearer image of the benefits and drawbacks of owning a car starts to form.

On the other hand, you have e-bikes, light, fast, easy to use, and capable of going long miles. Studies have shown that 67% of people in urban areas commute by car and they cover an average distance of 11 miles daily. Most ebikes can cover this distance without losing half of their battery charge.

This article hopes to answer the question of whether it is possible to replace a car with an ebike by showing you the pros and cons of each type of vehicle with a short guide on what to look out for to be able to choose the right transport for yourself.

Pros and cons of Electric bikes

E-bikes have been uniquely designed to fill the needs of modern commuters in more ways than one. Some of the major pros and cons of ebikes include 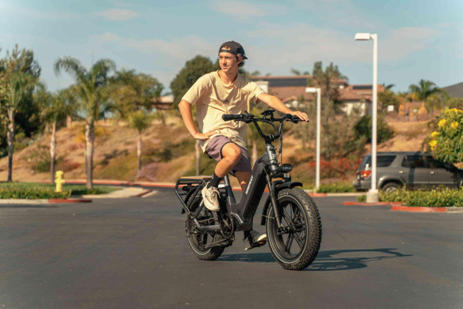 Pros and Cons of Cars

A car is a wonderful piece of machinery. Owning one comes with several advantages some of which include:

Choosing the right transport for yourself

In different parts of the world, cycling is becoming popular. More people are going for electric bikes and this owes largely to the design and wide range of use of e-bikes. In most cities, however, the roads are usually designed for cars and with the high number of cars, you can get an older version of a car for about the same price you would get a brand-new electric bike.

When trying to decide between going for an electric bike or a car here are a few factors to consider:

Cost is a crucial factor for many when choosing a mode of transport. It is advisable to go for a means of transport that is cost-effective and able to carry out the primary function of locomotion from one point to another seamlessly. Looking at the cost of an ebike and that of a fairly used car, the usual reaction is that ebikes cost more. This is not entirely true.

Cars come with fueling expenses, tax expenses, and other necessary costs such as licensing and maintenance. The common cost of an e-bike falls within the range of $700 to $2500, while that of a second-hand car may cost around $800. When you include the aforementioned costs of fueling, tax, licensing, and general maintenance, you would realize cars come at a higher cost.

Identifying early what you intend to use the vehicle for can be a major pointer in determining the sort of vehicle you should go for. Are you looking for a vehicle to commute from home to work? or a piece of machinery to take along on your next hiking or hunting trip? Or maybe you are in search of a vehicle for you and the family for your next road trip?

For each of these endeavors, you will find that either an electric hunting bike or a car would suffice. Choosing between either option is solely down to your purpose of use.

With the advancement of technology, we have become more aware of our environment and there has been a global effort to move away from negatively impacting inventions like the fuel combustion engines you have in automobiles.

Cars emit toxic carbon fumes that contribute to the depletion of the ozone layer. Ebikes on the hand provide a cleaner, safer, and more environmentally conscious alternative.

Ebikes are powered by batteries but when the power is off, they become more or less traditional bicycles. Cycling has numerous health benefits as it serves as a form of low-impact cardiovascular exercise. Riding also requires a high level of awareness, concentration, and balance. Developing these attributes has a positive impact on the brain.

Cars and Ebikes are useful in different and similar instances. However, getting the vehicle that perfectly fills your needs depends on carefully examining the several points mentioned in this article. In the end, arriving at a preferred choice should not be entirely difficult.

Apple Releases New Firmware for AirPods Pro 2 Ahead of Launch

What is that weird thing on all iPhone 12 models?

The 6.1″ iPhone XR will be available in 6 color versions, here they are